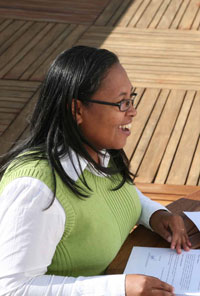 After obtaining a Master of Science in Applied Biological Sciences, Biochemistry fundamental and applied to food science and nutrition option in 1998, I trained as a biologist in a Development Centre of shrimp culture. In 2003, I was recruited by Resolve as a researcher consultant for the research phase (study of the eels state of knowledge and potential in Madagascar) of a proposed industrial development of the eels and elvers in Madagascar, as well as the feasibility study and implementation of the project in Madagascar. After studying Manager Marine and Coastal Protected Areas in 2006, and with knowledge of marine and coastal environment, I worked as a project manager within Resolve and mainly contributed to several studies of Madagascar marine and coastal ecosystems.